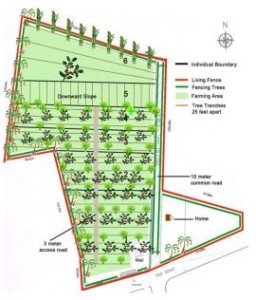 Thanks to many thinkers and doers, the first phase of setting up the farm was completed recently. And it’s nice to breathe easy for a while.

Looking back, the motor and water supply was the first one to come alive. Soon, an access road was laid which served as the main artery. The fencing and tree trenches were dug around the perimeter of the farm in one intense go. Then started the planting of the fencing bushes (mostly Jatropha, a local favorite) which kept happening on and off.

After 3 days of land survey and designing on paper, about 70 internal, contour trenches were dug at 25 feet intervals soon. And quite nervously, we ordered 8000 tree saplings. More horizontal access roads were added at 1 acre intervals.

We planted the first 300 saplings at a very slow pace. And saving the rest from scorching sun was a project by itself. When the first few silver oak saplings died, we felt very sad. The reality that some of them can not and will not survive the transition from cushy nursery environ was understood soon.

The folks who worked with us mulched and watered these saplings by hand which served as an inspiration(!) to set up the main pipeline. Soon dozens of drip lines were branching out. At this point, we could scale and planted and mulched 3000 more saplings.

Our farm is a 10 acre parcel under the care of 7 friends and sometimes we wonder exactly why our friends trusted a pair of rookies with their land. But we sincerely hope something good comes out of it.