Attempting a series on companion planting that has worked well on the farm both accidental and otherwise.

I think a successful combination of plants should meet at least three of  these criteria..

This particular combo of Castor ‘n’ Tomatoes is somewhat specific to the upcoming summer season or for places where it is always summer – like my home town Tiruchirapalli with the 3 seasons of hot, hotter and hottest!

There are so many traditional companions for tomatoes like flowers, onions and aromatic plants. I like Castor because its trunk is slender and straight and the leaves are broad. This allows the gentle, lateral light of the morning and evening through for the tomatoes to soak in but the harsh rays of mid-day sun are mostly filtered out. Tomatoes can grow well in partial shade also and there is no dearth for light in summer. 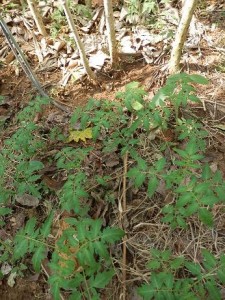 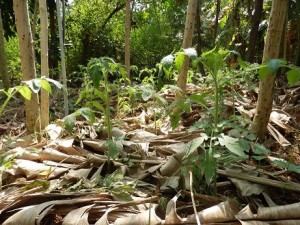 Castor has a lifetime of 11 months and tomatoes live well for 6 months.
So it is best to sync them up the latest by the time Castor is 5 months old.

We had about a dozen castor mini-trees growing across 3 contiguous vegetable beds each measuring 10 feet by 4 feet. These and their expired parents were providing an umbrella for ginger, our previous crop there that loves shade. Digging out the ginger had created quite a bit of aeration in the soil and also cleaned up the beds. The castor trees were just about 5 months old and 10 feet tall.

On Jan 5th 2013,  some ash (approx 20 gms per sq.ft) was added to these 3 beds and mixed well into the soil. And about 50 tomato saplings were planted in this castor grove and watered immediately. The beds were mulched with dry leaves big and small the next day. This kind of mulch shield seems important when using flat raised beds for veggie cultivation (versus the traditional furrow for saplings and trench for water method) because if the tips of the young tomato leaves touch the wet soil, they could start rotting.

Now to measure up against some of the criteria above:

So instead of watering once in 4 days, we moisten the beds once in 8 days.

So far, so good. Come April and I’ll know if this is truly a wombo of a combo.

Update: The area of cultivation suffered from an irrigation failure that was a little complicated to fix. It took us about 10 days and the plants could not weather the heat of April without water and wilted away.